Concussion is a counter-productive term: Let’s retire it 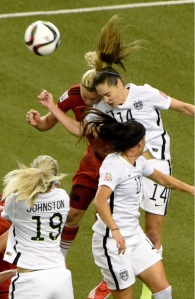 This photograph shows the collision between the German player Alexandra Popp (in red jersey) and USA’s Morgan Brian (in white).

For those of you who enjoy watching soccer (known as football everywhere outside of the U.S.), there was an unfortunate episode in the semifinal between the U.S. and German teams. As reported in the New York Times, two players inadvertently crashed heads. Both ended up on the ground, holding their heads, for minutes. New York Times reporter Jeré Longman reports that according to the oh-so-neutral-teams (NOT), “neither player displayed symptoms of a concussion.” After a 4 minute break occasioned by the two injured players lying on the ground, both players returned to play the rest of the game. To quote Mr Longman:

“Both players quickly returned to the game. Brian played 89 minutes and Popp the full 90, though her head appeared to continue to bleed after it was wrapped with medical tape.”

Well this was okay apparently because neither player suffered from a concussion. Really?

What exactly is a concussion? In a review, Ann McKee and colleagues write of Osnato and Gilberti who, in 1927, “studied 100 clinical cases of concussion of the brain, defined as a blow to the head with loss of consciousness.” [I think that this definition of concussion as a head blow + loss of consciousness is Osnato’s and Gilberti’s not McKee’s. But this is a bit unclear from the wording.] Today’s definition of a concussion is murky. As I was looking for an accepted medical definition for concussion, I encountered a marvelous paper entitled, “Concussion is confusing us all” by David Sharp and Peter Jenkins. [Luckily this paper is open access and thus available to all readers!] The abstract of this paper makes several critical points. I therefore quote the abstract nearly in its entirety:

“It is time to stop using the term concussion as it has no clear definition and no pathological meaning. This confusion is increasingly problematic as the management of ‘concussed’ individuals is a pressing concern. Historically, it has been used to describe patients briefly disabled following a head injury, with the assumption that this was due to a transient disorder of brain function without long-term sequelae. However, the symptoms of concussion are highly variable in duration, and can persist for many years with no reliable early predictors of outcome. … We propose that the term concussion should be avoided….”

Drs Sharp and Jenkins go on to explain that the first allusion to a transient impairment caused by head trauma was recognized by a Persian physician named Muhammad ibn Zakariyā Rāzī who lived in the 9th-10th centuries. Through the centuries, many definitions have been used but there have been two steady components of the definition of a concussion:

The second piece to this definition is problematic as it has become abundantly clear that the effects of head blows do not always resolve. They may instead build and cause damage that becomes evident after a delay or that accelerates in severity over time. From a definitional point of view, if a concussion has to be transient, then what is it called when a person’s symptoms don’t resolve for a long time? At what point does a concussion turn into some other entity? This issue has been addressed by using the term post-concussive syndrome to refer to enduring symptoms that are not transient. However in reality, it appears that one type of injury (head trauma) sets in motion a unitary pathophysiological process that causes different symptoms in different people depending on genetics, history and pre-existing conditions.

Clinical assessment of the likelihood of brain damage

A better approach to defining the problems that result from head trauma is to base it on the occurrence of head trauma first and foremost. The key issue in deciding whether a medical problem exists is to determine whether brain damage has occurred or whether a pathological process that will produce damage has been set in motion. Penetrating wounds such as those caused by modern weapons leave little to the imagination. Anyone who has an object enter the cranium has a brain injury.

In contrast to a penetrating head injury, a closed skull injury can occur when the brain accelerates (more on what this is below). In such cases, currently available imaging methods are not able to make it clear which patients have damage and which don’t. There may or may not be symptoms which may occur either immediately or after a delay. The only definitive way to check for damage is to slice up the brain, which can only occur post-mortem. So, in living patients, we use the best proxy that we have which is the set of neurological symptoms exhibited. The Mayo Clinic has guidelines that divide up closed skull head trauma patients into a continuum that gauges the likelihood of brain damage. I list three main subcategories here with a few key symptoms in parentheses:

The latter two categories, possible and probable brain damage, are collectively termed mild traumatic brain injury or mild TBI. Now fast forward 20 years down the road. A person who initially appeared to have possible structural brain damage may well be as seriously impaired as one who showed more serious immediate symptoms. In other words, mild TBI is mild only in the sense that the initial symptoms are far more mild. But eventually mild can add up to very severe and as we have seen far too often of late, lethal.

How can we tell which head blows have clinical import and which don’t? Which should be treated and which shouldn’t? Which are likely to cause cognitive changes and which are not? We could simply go by the occurrence of a head acceleration. Truthfully, this is not that easy to tell. Imagine watching a football game and trying to discern every instance of whiplash. You’d be a very busy person. Furthermore, many people experience blows to the head that result in no clinical sequelae. I once fell as I got off a boat and landed on the side of my face. I landed hard enough that the skin in my eyebrow was cut open. Beyond the wound, nothing happened. Not even a headache. Clearly setting the threshold for clinical concern so low that every hit to the head is a cause for concern is unwarranted.

I believe that any injury that fits the “possible structural brain damage” category should be treated very seriously. A person with such an injury should not continue playing in a sporting event. What is the difference between calling this condition mild TBI or a concussion? A mild TBI means that structural brain damage is possible. It may not be possible to know if structural damage has occurred for some time. But if brain damage has happened, the consequences are in no way mild. They are serious, life-altering and even potentially lethal. In stark contrast, a concussion is a medically useless term that gives the false impression that all will be well shortly. A patient that hears concussion may understand that their incapacitation is temporary and will go away with time. They may not take the injury seriously and therefore take no special care. Alternatively, continued symptoms may make the patient feel crazy since the physician told them that all would be well, “It’s just a concussion, your problems will go away.” Patients that feel that they are not being listened to don’t do as well as those who feel well cared for.

By implying a transience that is not in fact observed, the term concussion is a medical whitewash of a serious problem. Ms Popp and Ms Brian returned to action because they did not suffer from a concussion, whatever that is. Yet clearly both players showed symptoms that suggest the potential of structural brain damage. Concussion is a meaningless term. As Drs Sharp and Jenkins suggest, it should be “retired.”

What is meant by acceleration? Acceleration can mean that the head bangs into another solid object such as a wall or another head. But acceleration alone can also damage the brain. One example of this is whiplash in which the head accelerates in one direction and then reverses course and accelerates in the opposite direction. The brain lags behind (think of how something hanging from the mirror of a car lags behind the car, swinging back as the car accelerates forward) and bumps into the inside of the skull. Whiplash is an example of linear acceleration. Even more problematic is angular or rotational acceleration as would occur when the head is hit by a punch (e.g. a right hook). Rotational forces are more problematic than linear accelerations for two reasons:

One interesting corollary to this is that heading the ball in soccer, when done correctly, may not be as damaging as one would think. Heading the ball correctly involves linear forces and when done at the right spot of the head and at the right angle can produce little to no brain acceleration. This reminds me of jumping up and down on a trampoline. Accelerate up and then accelerate down, a vertical whiplash that only involves linear forces. Thousands of people jump on trampolines without incurring brain damage.