Head Games is a film to watch 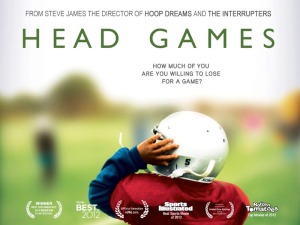 Head Games is a documentary film about head trauma in sports, including American football, soccer, and hockey. It is directed by Steve James and produced by Bruce Sheridan.

Head Games is a powerful film that lays out the history of head trauma, concussions and the NFL within the context of other organized and professional sports. Watching the film, I was struck by the rapid progress in awareness and knowledge that has been made since 2006. Prior to 2006, dementia pugilistica was the term used to refer to what was thought to be a rare condition suffered by a small number of ex-boxers. Essentially, having your clock rung during sports was just a fact of life and a rite of passage. Then in late 2006, Andre Waters, a NFL star, committed suicide. Chris Nowinski, a former Harvard football player and WWE wrestler, obtained permission from Mr Waters’ family to have his brain examined. It turned out that Mr Waters had the “brain of an 80+ yr old;” he had chronic traumatic encephalopathy or CTE. Having retired from wrestling because of post-concussion syndrome, Mr Nowinski pursued the connection between football and brain injury. He wrote a book upon which this film is based and Mr Nowinski figures prominently in the film as well.

The reality of how devastating hits to the head can be is brought home as the viewer painfully watches a relatively young (in his late 40s when the film was shot) retired football player, Gene Atkins, struggle to name the months of the year in order. Long pauses belie his utter failure to retrieve up this basic semantic knowledge. Bob Costas asks what is an acceptable level of risk. He goes on to make the excellent point that “hitting is incidental in other sports but is fundamental in [American] football.

In one section of the film, we watch Dr Ann McKee of Boston University School of Medicine tell the widow of a football player that her husband had the “structural” signs of CTE. When asked how that information made her feel, the widow offers that she finds it both comforting and guilt-producing; the latter as she remembers getting angry with her husband who she now knows had CTE. I can only imagine the experience of CTE creeping in as a full-blown civil war between the brain of the past and the diseased brain. Although not featured in Head Games, Dave Duerson comes to mind. Mr Duerson was, by all accounts, brilliant as well as well-liked. He ended his life at the age of 50 years by shooting himself in the chest, ensuring that his brain could be studied by the group at Boston University. How he must have struggled mightily against his diseased brain in order to be so generous at that final moment when he admitted ultimate defeat.

The film tells the story of Owen Thomas, a football player at University of Pennsylvania. Mr Thomas did not suffer any documented concussions. Yet he killed himself at the age of 21 years old. An examination of his brain showed CTE in the frontal lobes. As Dr Christina Master says, “You don’t get a pass on sub-concussive hits. They’re not free.” This is such a critical point. In essence, we should be looking for head trauma – either high head accelerations or head forces – rather than for symptoms of concussion.

The film also avoids simple answers as it clearly shows how much playing team sports can mean to a child or young adult. Cindy Parlow Cone, a former Olympic soccer player, has strong feelings about head trauma and brain injury borne of personal experience. Having “seen stars” more than 100 times during her career, she now gets lost while driving. Yet she clearly loves soccer and remains in the sport. She now coaches teenagers. Ms Cone is adamant about protecting her charges, “When my kids get hit in the head, I immediately sub them out.” Similarly, Keith Primeau, a former NHL star, remains in the sport from which he retired with post-concussion syndrome. And now he coaches teenage boys, including his son.

The movie presents diverse opinions on acceptable risk and does not proscribe a solution. It is striking that Ms Cone and Mr Primeau remain in the sports that both gave so much to them before ultimately robbing them of their futures. It is uncomfortable to watch Mr Primeau’s son discount his own injuries for the love of playing hockey. With few exceptions, the viewer sees teenager after teenager say that, given the choice, they would choose playing over brain health. Sport is a powerful social experience. Life lessons are learned, friendships are made, and camaraderie experienced. How do we  balance these benefits with the potential harm that may result from sports? The film very soberly presents both sides of the equation and lets the viewer make up his or her own mind. Because of this even-handed presentation, the film will stay with the viewer for a long time as she or he contemplates the complexities of the issues.

Please join Bruce Sheridan, Producer of Head Games, and me on October 21, 2014. We’ll be talking about the film, about documentaries in general and about the issue of sports and brain injury. It is all free at Science + Cinema: New Screen Frontiers.

To learn much much more about the brain in all of its splendorous detail, check out my textbook. The second edition is now out!! Get it here: textbook.
Loading Comments...
Comment
×
%d bloggers like this: