Farewell to a friend and centenarian 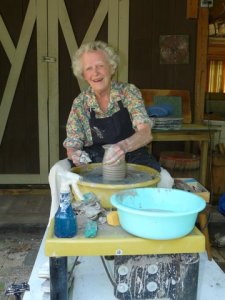 Caryl looks pleased with herself while throwing pots.

Yesterday, a good friend died at the ripe age of 102 years, 3 months, and a couple of days. I met Caryl through my spouse, Gisèle, more than 20 years ago. Gisèle and Caryl were both part of an artists’ cooperative in Hyde Park (Chicago not London). Caryl was a total live wire, funny and unexpected, interesting and opinionated. Caryl always said that her husband Jimmy, a younger man, didn’t have “good genes” meaning that his family was not known for longevity – he only made it to his early 90s. I always felt that Jimmy made it that long because Caryl willed it to be so.

Gisèle and I had lots of fun times with Caryl. After Jimmy died, Caryl spent weekends at our cabin in Michigan. She got a kick out of driving us around in both our golf cart and our pontoon. She threw pots and played the violin into her late 90s. We went to concerts together at her beloved Chicago Symphony and at Mandel Hall. In a memory that I will always cherish, I watched the 2008 election of Barack Obama with her and several other feisty residents at the Montgomery Place Retirement Home.

I am not sure when Caryl’s ability to make new memories started to change. The start was subtle and individual instances of forgetfulness were not even noted at first. As best as I can remember (which is no great shakes), her memory problems started when she was 94 or 95. By her 102nd birthday, Caryl was not making any new memories. Through the intervening years, I learned so much from Caryl’s journey. Most importantly, I learned that personality shines through even as the ability to make new memories fails. I never knew that before my friendship with Caryl and it is such a profound lesson. Caryl reacted to situations as Caryl. She had the same humor that she always had. She still loved dogs, sitting outside at dog-walking time and petting every dog with an agreeable owner that walked by. She knew which musical pieces she liked (Mahler’s 5th Symphony was a favorite) and she knew how musicians should play (without much body movement). As Gisèle, Caryl and I shared countless meals, drives to and from Michigan, fourth of July-s, and musical concerts, laughing and talking, Caryl’s inability to remember the year or asking the same question more than once simply did not matter. These amnestic moments did not impact the camaraderie of our friendship or the bonhomie of our get-togethers. 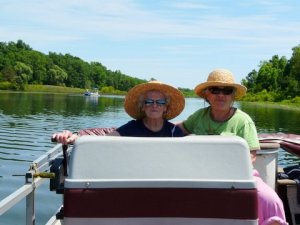 I also learned many specific features about memory loss from Caryl. For Caryl, the first thing to fall by the wayside was days of the week, dates and times. This makes total evolutionary sense as days, dates and times are modern inventions with no evolutionary meaning. In other words, throughout evolutionary time, calendrical terms were not ever under any selection pressure. Not until modern times did arriving minutes late to school or work have any consequences. Makes one wonder about the part of the neurological exam concerning orientation, often investigated by asking the patient to name the date, their location and the current President of the United States. Long after Caryl would have failed this mental status exam, she was still a very with-it Caryl. 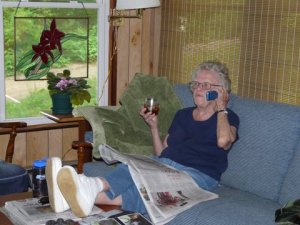 Caryl relaxes with a Manhattan after a full day of fun in Michigan.

Eventually, Caryl’s memory problems extended beyond dates and times. In 2011, Caryl was 98 and she came to Gisèle and my 25th anniversary party. We had a guest book where people wrote notes. When Gisèle and I read through our guests’ comments later, we saw that Caryl had written once and then a second time a few pages later, clearly having forgotten writing the previous note. While Caryl could forget that we had had an outing the previous week, she would remember people that she met or particularly emotionally charged events.

Even when Caryl asked the same question several times, suggesting that she didn’t remember Gisèle’s or my previous answers, it was clear that she did. The question would morph in a way that incorporated an answer that Caryl did not consciously remember.

Caryl: Are you taking any trips soon?

Peggy: Not very soon. But in January we’re going to go to Florida and see my parents.

[minutes later] Caryl: Are you taking any trips soon?

[minutes later] Caryl: Are you going to see your parents soon?

Caryl also exemplified the persistence of early memories over more recent memories. Caryl had a colorful life. Her family took in boarders and Caryl gave tours of Chicago to visitors to the World’s Fair (Century of Progress Exposition) in 1933-34. She and her mother used the money they made to travel, running into all sorts of adventures. There was the time that they laid their bedrolls down in the forest and Caryl woke up to a bear sniffing her face. Another time, Caryl and her mother found themselves sleeping unintentionally on someone’s land and Caryl ended up “paying” for their stay by playing her [Becker] violin at the Sunday church service. My all-time favorite story of Caryl’s was about traveling on a “tramp steamer” that was taking a load of dynamite to South America. Along the way, two people died and a “dope fiend” [Caryl’s words] went into withdrawal. Caryl remembered these stories for a long time. When they started to slip from her memory, Gisèle would help her. Caryl would look in amazement at Gisèle and say, “That’s right. How did you know that?” 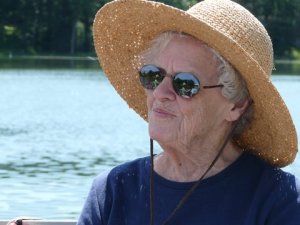 Caryl will be missed.

Eventually (in her final year) even those early memories abandoned Caryl. And with the memories, Caryl slipped away, no longer the person she had been and locked into a body with “good genes” and a pacemaker. I am happy that Caryl’s struggle is over and rejoice in having been her friend for 20+ years.