What color is that dress after all? Answer: no color

This image clearly shows a dress with stripes. The wavelengths and lighting are unusual in that they are perceived by some as a gold and white dress (me!!) and by others as a blue and black one. Unlike many “optical illusions,” this image is perceived as one color set or the other by most people. In other words, people are unable to switch between the two perceptions.

A few days ago, the world was taken by storm by the is-it-a-gold-and-white-or-a-blue-and-black-dress controversy. There have been several explanations of this phenomenon from several different experts (see for example Wired and NYTimes). As far as I can tell these explanations center on two points:

Both of these points are valid and yet neither explains why some see the dress as gold and white and others as blue and black and most importantly why most people (including me) see one perceptual pair and are unable to see the other perceptual pair. The explanation that makes the most sense to me for this feature of the “illusion” was raised by Duje Tadin, Associate Professor of Brain and Cognitive Sciences at the University of Rochester in an article by Jonathan Mahler. Dr Tadin suggests that variation in the number of short wavelength cones that a person has is responsible for the different perceptions across individuals. Let me explain.

We have three types of cone photoreceptors each of which has a preferred wavelength that it responds to. 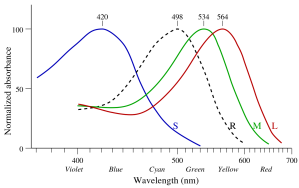 This graph from Wikipedia shows the absorbance spectra of the three types of cone photoreceptors that humans possess. The colors listed at the bottom are the colors that are typically perceived at each wavelength. For example, wavelengths of 440 nm or so are perceived as blue by most whereas those of 580 or so are perceived as yellow. These spectra were first described by George Wald and Paul Brown in 1964. George Wald won the Nobel Prize in Physiology or Medicine in 1967 for his myriad contributions to our understanding of the chemical basis of vision.

Dr Tadin suggests that there is variation in the number or proportion of S cones across human individuals. Assuredly so. Perhaps, those with a few more S cones see the dress as blue and black whereas those with a few less see it as gold and white. Rather than there existing a boundary region where a person could flip back and forth between the two color pairs, a strict threshold may exist, so that just a handful of S cones over or under that threshold throws a person’s perception into one or the other camp. [Note added on March 11, 2015: There is no evidence for this idea of strong variation in the number of S cones. Nor is there evidence that the number of cones of a certain type influences color perception.]

Some may be wondering why I refer to cones as S, M, and L cones rather than the popular vernacular of blue, green and red cones. This is a very important point. Actually one could say that it is the critical point. There is a distinction between a stimulus and a perception. The stimulus does not predict the perception. Let’s put it another way. There is no color in the world. There is not even color in the retina. There is only color in our brains, in our neocortex even. What exists in the world is light that is characterized by a wavelength. Our neurons respond to light and our brain perceives color. Do we always perceive the same color given an identical stimulus? No.

While there are many illusions of color perception, I want to use a different type of illusion to illustrate the difference between a stimulus and a perception. This one is taken from HM Burian (The objective and subjective factors in visual perception. J Assoc Med Illustrators 9:4, 1957) as reproduced in Chapter 2 (Binocular vision and space perception) of the 6th edition of Binocular Vision and Ocular Motility edited by GK von Noorden and EC Campos. On the left you see burlap with depressed grooves and on the right you see burlap with raised ridges. 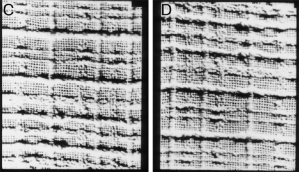 This is an illusion that was originally made by HM Burian and reproduced in Chapter 2 (Binocular vision and space perception) of the 6th edition of Binocular Vision and Ocular Motility edited by GK von Noorden and EC Campos.

The grooves on the left are in fact the same as the ridges on the right as you can see here in an image that is simply flipped up-down: 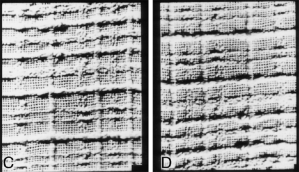 This is the same image as above except the image has been flipped up-down so that up is down and down is up.

So why do we interpret the same stimulus – let me repeat that, the same stimulus – differently simply based on its orientation. In this image, there is no context. So we read into this image that the lighting is coming from above because the idea that light comes from above, in the absence of any obvious artificial light source from below, is a well learned fact. Thus when a line of light is above a line of shadow, that light line is interpreted as sticking out to catch the light. In contrast, when a line of light is below a line of shadow, the dark line is interpreted as a deep feature that is in the shadow of the overhead light. So far so good.

Now take a look at this: 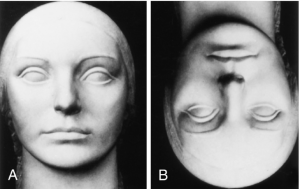 Another pair of flipped images from the same source as the image of burlap.

In both face images, the right-side-up one and the wrong-side-up one, we easily perceive that the image is a face. Moreover the nose comes out of the plane in both instances. What is the difference between these faces and the burlap? Well burlap can be ridged or grooved; we have no a priori ideas about burlap. On the other hand, faces are faces and noses come out of faces. So we simply see the face on the right as upside down but not reversed in depth.

I do see the face on the right as deeper, less flat. I think that this is because there is a bit of the burlap effect above even when looking at a face. For example, take a look at the eyes, the lower right cheek, the neck, and under the nose. All appear darker and deeper to me on the right than on the left. I do not perceive the darker and deeper shadows as evidence that the face is inside out but rather that the face and head have more depth on the right than on the left.

Let’s recap. What is out there in the world is light, light that has a wavelength. Within a range of visible wavelengths, light is a stimulus for the human visual system. What we perceive is color but the color exists only in our brains. Color does not exist in the physical world. Light does not have a color. Cones are not responsive to color. Color is a construction of neural circuits in the brain.

And finally, let’s get back to that darned dress that caused all the hubbub. What color is it? Well the dress is not colored. Only our perception of the dress is colored. The particular colors that we perceive in the dress are subject to context, just as all perceptions are. When the dress is placed in its full context, I expect that all will perceive the dress as blue and black!! But you, my esteemed reader, and I know, it just ain’t so. That dress has no color!! 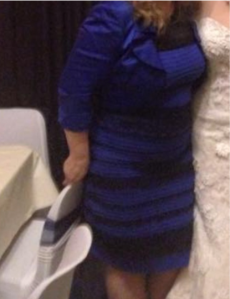 The dress will be perceived as blue and black by virtually everyone when seen within its full context. From the NYTimes.

Categories: Brain Function, Perception, The brain in the news