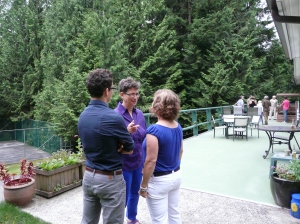 The author talking with in-laws on family vacation in Sunshine Coast, BC. Retelling stories is an experience in its own right.
Who took this photo? Who knows?

Here are my two cents on Brian Williams and the malleability of memory. Let’s start by fully acknowledging the limitations of perception. Perception of the world outside is very different from the record produced by a camera or audio record. Perception of our innards is even farther from accurate: is that a knife in my stomach or gas? So the information coming in to the brain, information from which memories are formed, is no great shakes to begin with.

Our brain is the physical reality for  memory and for retelling. When we remember, we remember a g’mish (conflation) of the original episode and the retelling. Then we tell the story again, and now what we remember is a g’mish of the original episode, the first retelling, and the second retelling. People retell stories of highly emotional events over and over, flavoring the events with the incidental contexts and emotions associated  each remembering. The flavors add up which means that embellishments and errors add up. As a consequence, we can expect remembering to be even less accurate to the external facts than is perception.

What does this all boil down to? The fact that Brian Williams remembered the very scary events of 2002 incorrectly do not surprise me in the slightest. Heck, I often adopt my spouse’s experiences as my own, even experiences that I have an iron-clad “alibi” for since I was not in the physical vicinity of the actual episode. What does surprise me is that Mr Williams did not fact-check his own memory.

I was writing to a colleague about my MOOC teaching experience. I drafted, “I received 100s of emails from MOOC students.” Then I thought about it and realized that was unlikely to be accurate. I went to my MOOC mail folder and realized that at that point the total was around 30-50. It felt to me as though I had received hundreds of emails but the reality was quite different. In my example, no harm would have been done if I had kept my exaggerated total in place (which I did not). But I am not a journalist and I was writing an informal email to a colleague. If I can check my own facts, I think journalists can too.

Today I learned of the death of David Carr, a journalist at the New York Times. Mr Carr wrote a memoir entitled The Night of the Gun. According to Bruce Handy’s review of Mr Carr’s book, Mr Carr tackled his past as a journalist, interrogating his memory by examining documents and conducting interviews. The importance of approaching one’s own memory with the same skepticism as other histories is highlighted by the story behind the book’s title. As Mr Handy writes, “Carr remembers being in such a rage that a close friend drew a gun on him; after reporting the incident out, he realizes to his mortification that it was he, more crazed than he knew, who drew the gun on his friend.”

Interestingly, the importance of fictional license is also highlighted in Mr Handy’s review: “The absence of novelistic license here makes you realize why “surgically enhanced” nonfiction is rewarded on the best-seller list….writers with a bent more literary than literal do have a knack for creating lively characters and vibrant scenes.” I wholeheartedly agree with Mr Handy. Some embellishment, some morphing of reality through the personal lens of experience and opinion jazzes up a story. Or a picture. The water color on the right below shows more of the tucked in coziness of a small hotel room shown in Paris than does the photograph at the left. 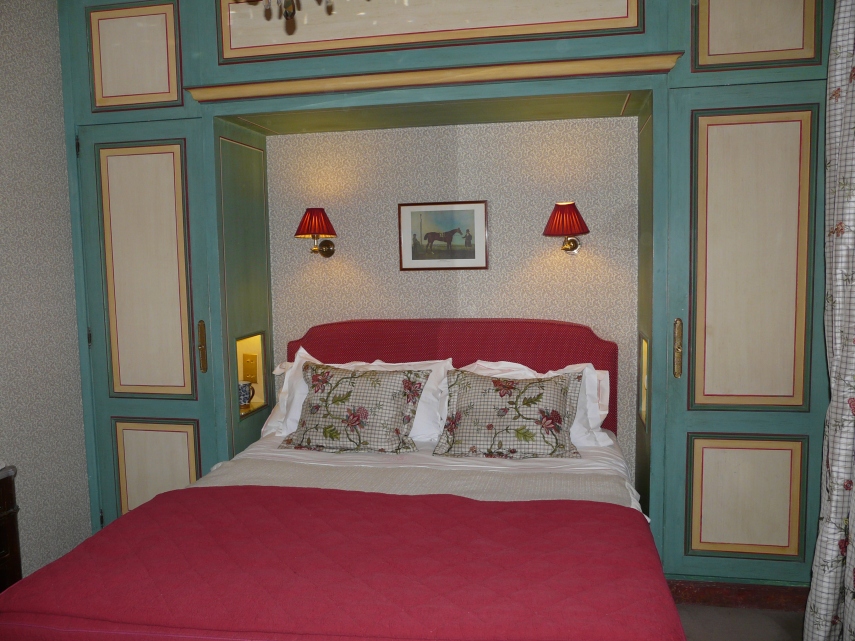 A photograph of a Paris hotel room. 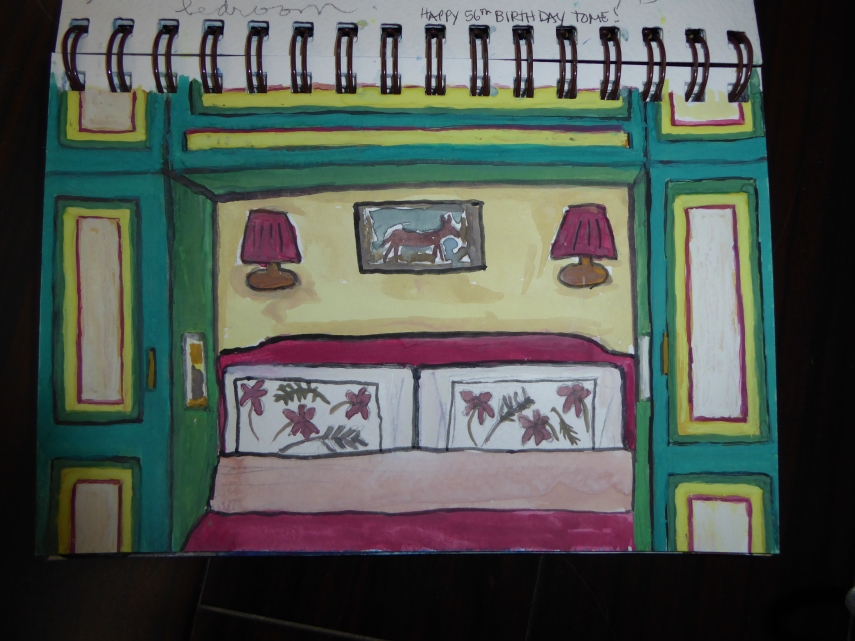 A water color painting, by Gisèle Perreault, of the room in the photograph to the left.

Below is another example of the importance of picking and choosing, embellishing and rejecting among the components of reality to achieve an artistic gestalt. This example compares a recreation of Vincent Van Gogh’s bedroom in Arles (left) with one of Van Gogh’s own painted versions (right). 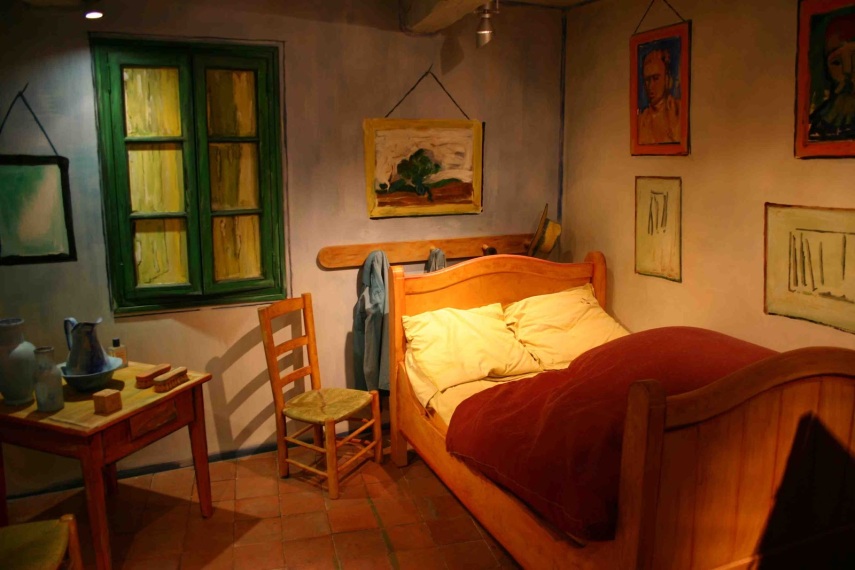 This is a photograph of a reconstruction of Van Gogh’s bedroom that is located in Arles, France. Photo credit: Novel Travelist. 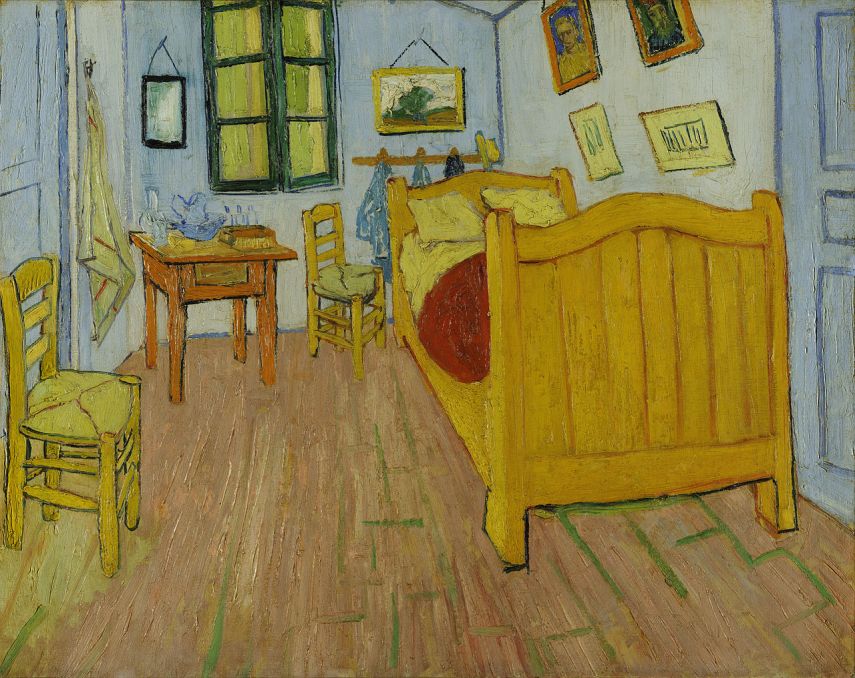 Notice Van Gogh’s numerous deviations from proportion (e.g. window’s size) with the whole scene telescoped.  Artistry requires an infusion of self and interpretation whereas non-fiction including journalism, works best when the self is removed from the interpretation; describing the self’s contribution also works. Memoirs walk a difficult path between. [Note to self: If ever so tempted, write your memoir and call it a novel.] 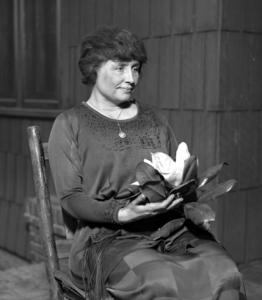 This is a picture of the blind and deaf American scholar, Helen Keller. The photograph was taken around 1920 when Miss Keller would have been about 40 years old.
From: http://en.wikipedia.org/wiki/Helen_Keller

Finally, let’s talk about Helen Keller. As you may or may not know, she wrote a story entitled The Frost King when she was only 11 years old. The story was well received and published. However, Miss Keller was then accused of plagiarizing a previously published, similar story entitled The Frost Fairies. There were similarities between the stories and indeed Miss Keller’s Teacher, Anne Sullivan, had read the book to her.

This experience had a devastating effect on Helen Keller. She lost one important friend over the flap and she never wrote fiction again. She details her experience of this time in her autobiography, The Story of My Life,  which is available through the Project Gutenberg and is very worthwhile reading.

When the whole plagiarism flap occurred, one of the people from whom Helen Keller received strong support was  Mark Twain. An excerpt from Mr Twain’s full letter is the following [my emphases]:

“As if there was much of anything in any human utterance, oral or written, except plagiarism! The kernel, the soul–let us go farther and say the substance, the bulk, the actual and valuable material of all human utterances in plagiarism. For substantially all ideas are second hand, consciously or unconsciously drawn from a million outside sources and daily use by the garnerer with a pride and satisfaction born of the superstition that he originated them; whereas there is not a rag of originality about them any where except the little discoloration they get from his mental and moral calibre and his temperament, which is revealed in characteristics of phrasing.

When a great orator makes a great speech you are listening to ten thousand men–but we call it his speech, and really some exceedingly small portion of it is his….

No doubt we are constantly littering our literature with disconnected sentences borrowed from books at some unremembered time and how imagined to be our own, but that is about the most we can do. In 1866 I read Dr. Holmes’s poems, in the Sandwich Islands. A year and a half later I stole his dedication, without knowing it, and used it to dedicate my “Innocents Abroad” with. Ten years afterward I was talking with Dr. Holmes about it. He was not an ignorant ass–no, not he; he was not a collection of decayed human turnips, like your “Plagiarism Court,” and so when I said, “I know now where I stole it, but who did you steal it from,” he said, “I don’t remember; I only know I stole it from somebody, because I have never originated anything altogether myself, nor met anyone who had!”

I will join Mark Twain in confessing. Look above! After reading Mr Handy’s book review, I wrote “the importance of fictional license”. Then when I copied the ensuing quote over, I realized that I had adopted “license” from Mr Handy. Word plagiarism. This happens sufficiently often that now when I take notes, I write exact quotes. I find that if I put the notes into my own words, I am later apt to come up with the source’s words, which appear in my head as though they are my own thoughts. However, if I put down the original quote, at least I know what I need to deviate from or else place in quotes.

Categories: Perception, Psychology, The brain in the news