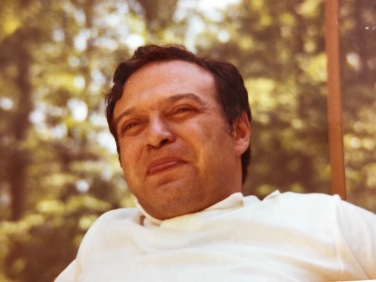 Arthur Mason in his Bethesda home, circa 1975.

Arthur K Mason, Washington attorney, turned-wood collector, and lately a memoirist, died at home at the age of 93. He was among the youngest 10% of those who served in World War II, and one of less than 3% of WWII veterans who survived to 2019. Arthur’s health turned sharply worse around the holidays, and he was airlifted off Upper Captiva Island, Florida on New Year’s Eve day. He then flew home to GW hospital, where his hospital room was easy to find by the laughter that spilled out. Once back home, Arthur or Bunky as he was known in his family, continued to regale family and friends, in- and out-of-towners alike, with stories.

Arthur’s eclectic law practice ranged from securing the landing rights for the Concorde to representing the flash-in-the-pan phenomenon that was Cinerama, to a wide range of large business deals, along with a sprinkling of wills, divorces and real estate. Arthur remarked that he often felt that his job was more personal than legal. Arthur was a champion at talking with people about matters large and small. He was able to segue from “How is Sally?” to sports before getting to the business at hand, an approach that made clients, many of whom became friends, more comfortable with hard issues. He always had an eye toward de-escalating matters and ending the need for attorney intervention. Another key feature of Arthur’s approach to law stemmed from advice that Arthur received from the leading movie producer and MGM director Louis B Mayer, “Young man, I can find lots of lawyers who can tell me what I can’t do, what I want is a lawyer who tells me how I can do it.”  To Arthur, this “was a very important lesson and I have always focused on the “how”, not the “can’t” ever since.”

One of the cases that stayed with Arthur was an aristocratic woman “Veronica” whose son “Jeffrey” was born to her as an unmarried teenager and who now needed a passport to take a coming-of-age tour of Europe. Veronica was quietly panicked because Jeffrey believed that she was his aunt who had adopted him as a baby. The elegant woman was eager to continue this fiction indefinitely. Arthur approached a rather high official at the Passport Office and after a long discussion of the background, “Alan” was eager to help. Arthur and Alan decided on an approach whereby Alan personally received Jeffrey’s passport application. Instead of asking Jeffrey for a birth certificate, Alan used the birth certificate listing Veronica as the mother which had been previously provided by Arthur. Alan handed Jeffrey his passport, and a devoted mother’s secret was safe.

Just over two years ago, Arthur’s wife Jane embarked on a trip while Arthur stayed behind on Upper Captiva Island. Eager to distract him and keep him from feeling lonely without Jane, a friend of Arthur’s challenged Arthur to write a story a day about his life. This suggestion sparked an outflow of writing, not quite at the instructed pace but with a steadiness that has resulted in 90 chapters, the final three of which were dictated just a week before he died. In the words of his niece, Arthur’s method was to write and then to edit “with the precision of a musician with a tuning fork.” Arthur’s chapter on the USS Indianapolis tragedy was recently published in two parts (on the sinking and the court martial) in the U.S. Naval Institute’s Naval History Blog. Arthur’s family will soon publish the memoir. 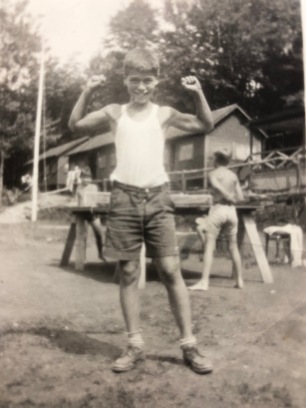 Arthur Mason at Greylock, circa 1935.

Arthur Kent Mason was born July 20, 1925 to George Zachary Mason, a Yale-educated forester and founder of Camp Greylock, a camp for boys in Beckett, Massachusetts; and the former Esther Kent, a public-school teacher. Arthur was raised among a large extended Jewish family on the West side of New York City. Summers were always spent at Greylock with his parents, friends, and classmates. He attended Ethical Culture Fieldston School in New York City and entered Harvard College at age 16. Happy to get out of Harvard Yard and eager to fight for the “great cause” (aka WWII), he enlisted in the Navy at the age of 17. He became an ensign and wound up as the youngest officer on The Spangler, “an obscure but serviceable warship.” Arthur never saw combat, which he viewed as lucky given that the ship “had World War I torpedoes, which we never fired, and probably would not have worked if we had.” Arthur served in the South Pacific until May of 1946. 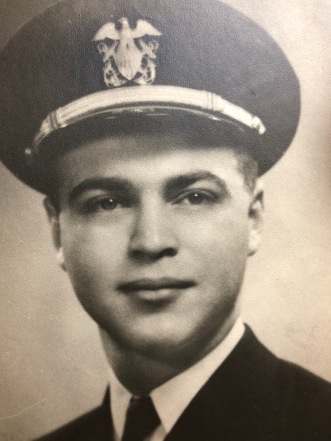 Handsome Arthur in his naval uniform, circa 1943.

On leave in 1945, Arthur went to Boston and told Harvard that he anticipated completing his service the following year and wanted to arrange to come back and complete his degree. In response, Harvard gave him credits for Naval Science and offered him a diploma. Armed with his BA, Arthur mailed in an application to Harvard Law School from Hong Kong. He received a letter at sea, read that he was accepted, and promptly stuffed the letter in his sea bag. Two days after being honorably discharged, Arthur showed up in Cambridge to arrange his entry into the Law School in the fall. The Dean looked at his crumpled letter and asked, “Mr. Mason, what do you think this is, a coach ticket, good on any train, any day? This letter admits you to the Class starting in February 1946.” Arthur offered that he had been otherwise engaged in a war roughly 12,000 miles away at that time; the conversation went downhill from there. Arthur then went over to Columbia Law school, “presented my Harvard transcript, and said I would like to go to Columbia in September. The Dean smiled and stuck out his hand.” This story always amazed his children as one from a different age and struck his grandchildren as a way of doing things on an unrecognizable planet.

After years of vacationing at a time-share condo on Sanibel and Captiva Islands in Florida, Jane and Arthur looked out at the Gulf and imagined a nature-centered island community. Grossly under-prepared for the task ahead, Arthur forged ahead with an ambitious building project on Upper Captiva, a remote island that at the time had very few houses and no electricity or phone service. Forty years later, it remains an island without cars and accessible only by sea or air. From the start Arthur saw the promise of a community respectful of and centered upon nature. Arthur was the driving force behind bringing electricity to the island; building a lake that is home to countless herons, egrets, anhingas, ibises and the occasional alligator; and the creation of the Safety Harbor Club, a community of 88 homes that made a spit of sand into a loving community of people from all over the world. Book club, weekly Sketch-Fest, yoga, chorus, and annual theater productions comprise the cultural life of Bunky Island, as Arthur’s children called Safety Harbor. After Arthur sold his house in Safety Harbor Club just weeks before his death, he called in a farewell address to the Club, expressing how emotional it was to not be a member of Safety Harbor, “a place that would not exist but for me,” for the first time in 40 years. In response, Arthur was voted a lifetime member and then promptly asked for his dues, to which Arthur immediately raised a point of order. 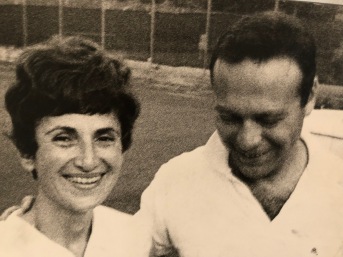 Arthur Mason met Jane Sommer in early 1953 and the pair were engaged three weeks later. Married in July of 1953, Jane brought art into Arthur’s life. In the mid 1980s, the Masons developed an interest in craft, specifically in turned wood bowls. Never one for timidity, they jumped in to collecting eclectic work of both classic artists, such as Bob Stocksdale, and artists who pushed the envelope such as Robyn Horn. Hundreds of bowl purchases, many custom lighted cabinets and many museum donations later, the Jane and Arthur Mason Collection is recognized as the one of finest collection of turned wood. A show of 120 pieces at The Mint Museum in Charlotte, NC spawned recognition and a beautifully illustrated book. At the not infrequent tours of the home wood collection, Arthur could hold forth with some gusto. As a former law partner said back in 1988, in the early days of the Mason wood collection, “Arthur has developed a smooth, funny talk in which he can trace the entire history and significance of any bowl in less than five minutes. Unfortunately, there are more than 80 [in 1988, now hundreds] bowls, so figure on being there 4 to 5 hours [now days].” 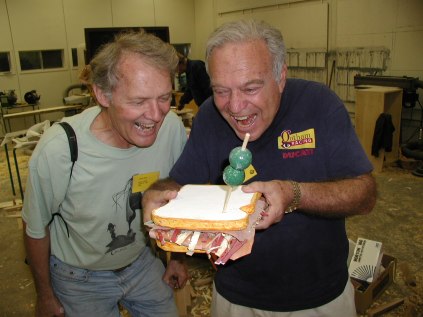 Arthur enjoyed dabbling in making art. Here he is with his friend and creative partner David Wahl and their wood creation at the Emma Lake Craft Workshop in 2000.

Arthur’s mind was always working. Upon entering a restaurant, he estimated the average bill, number of tables, and turnover to auto-calculate the evening’s gross receipts, the waiters’ evening tips and their annual income. One day before 2001, Arthur came to pick his daughter Peggy up at the airport. As she stepped out of the jetway into the gate area, he gave her a perfunctory kiss before launching with verve into the disconnect between the number of taxi cab companies, the taxi license plate numbers, and the frequency of cabs on the street.  The day before Arthur died, his family saw that they would never have another conversation with him, a fact that devastates us then and now and diminishes our future. Arthur’s words about his own father are the best way to close: “As I have gotten older I become more and more aware of how much I owe my successes in life to his teaching, moral fiber and guidance.” We have learned to love and live from the master. 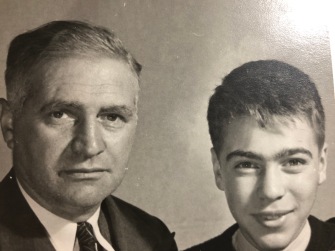