Haozhe Shan in front of the re-creation of Van Gogh’s bedroom at the Art Institute of Chicago in early 2016.

Three years ago, an incoming University of Chicago student named Haozhe Shan emailed me asking for an opportunity to work in my laboratory. His letter was well written and demonstrated a focussed and specific interest in social neuroscience. I agreed to talk with him and immediately liked him. Even prior to taking a single college class, he had a knowledge of psychology that appeared to surpass my own. Granted I took exactly one Psychology class in college (35 years ago). Nonetheless, I was impressed and as it turned out, I was right. Haozhe knows more Psychology than I do.

From the very beginning, Haozhe bubbled over with ideas. One of his ideas was to study social rejection in rats. Initially, it was really easy for me to tell him that his experiment to test for social rejection would not work. But Haozhe was not easily thrown off course. Throughout his first year, he worked with Inbal Ben-Ami Bartal, then a graduate student and now a Miller Fellow at the University of California-Berkeley. Together they came up with sequential modifications to the experimental design until the day came when I could no longer dismiss the idea. In fact, I thought it was a really intriguing idea and a clever and effective experimental design. I gave Haozhe the go-ahead to pilot the experiment during the summer between his first and second years. When he got promising results, I gave Haozhe the go-ahead to run the study during the summer of 2015.

Haozhe wanted to know whether rats could feel socially rejected. And he wanted the test to be subtle. So bullying, violence or even the threat of violence was off the table. Essentially, Haozhe aimed for something as subtle as exclusion from a game of toss, a common paradigm used to study social rejection in humans. Imagine three people tossing a ball around. At some point, two of the three toss the ball back and forth, leaving out the third person. As you may imagine, this does not feel good to the person left out of the ball toss game.

The question that Haozhe wanted to tackle was: would rats feel badly if they were rejected in a non-physical way? Would rats feel excluded if they were dissed in a purely “psychological” way? We needed to find a rat version of the ball toss game.

The paradigm that Haozhe and Inbal came up with was based on our findings that rats help other rats but only so long as the victim rats are of a type (aka strain or stock) that the helper rats are familiar with. [When I say help, I am referring to a rat opening the door to a plastic tube – aka restrainer – to let out a rat trapped within. See our original article in Science in 2011 or watch the accompanying video to see helping rats in action. In this paradigm a free rat can help – or not – a trapped rat by opening the door to the restrainer.]  In other words, albino rats that have never met black-caped rats don’t help black-caped rats but they do help stranger albino rats. Furthermore, if an albino rat lives for two weeks with one black-caped rat, then the albino rat will help any black-caped rat. This all means that when it comes to helping, rats are particular about the type of rat but not about the individual rat. Individual familiarity simply doesn’t matter to rats (in helping) but some type of comfort level with the type of rat is required for helping to occur.

The reader may be wondering whether exposure is sufficient to render a rat helpful to another type of rat. In other words, if an albino rat saw and smelled and heard a black-caped rat but never physically interacted with him, would that count as familiarity? The human version of this experiment is played out all over the world all the time. Thinking of this question has always reminded me of the American South during the nineteenth century, when blacks and whites were exposed to each other and yet did not get along, to put it mildly.

To look at this question, we are undertaking an “exposure” experiment. In this experiment, four rats are housed in “double-wide” cages. Down the middle of the cage is a wire mesh barrier. Rats on either side of the barrier can see, hear, and smell each other. They can even touch each other with their whiskers, which for rats is similar to us seeing someone or touching another’s face with the fingertips. But the rats on either side of the mesh cannot physically interact by playing, chasing one another, grooming each other and so on.

Our expectation is that rats from the control condition, where an albino rat has lived and interacted with a black-caped rat, will help black-caped stranger rats. Then, results from the experimental condition will tell us whether exposure to a type of rat is sufficient to permit helping rats of that type (if they do help) or physical interaction beyond whisker touching is needed for rats to help rats of a foreign type (if they do not help). An undergraduate in the laboratory is currently leading this experiment and we’ll have the answer in a few months. Stay tuned!!

Rats  get their (helping) identity from who is around them

What our experiments with albino and black-caped rats suggested to us was that just living with another type of rat for two weeks is enough to make rats helpful toward any rat of that type. That made us realize the power of the social environment and also made us wonder whether genetics would be similarly powerful. We realized we could do an experiment on rats to answer this question; the same experiment in humans would be completely out of the question.

In one of the most fun experiments of all time, we transferred albino pups (pup is the name for a rat baby) into black-caped rat litters on the day of their birth. These albino pups grew up entirely with black-caped rats, eventually living with a black-caped litter mate (~step-brother) after leaving their foster mother’s care. These albino rats never saw another albino rat, living their lives in an entirely “black-caped world.”  We’ll call these rats “cross-fostered albino rats” to indicate that they grew up fostered by a different strain. 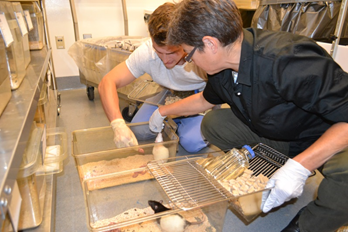 Back in 2012, Tony Logli, a former laboratory member and soon to be physician, and I transferred albino pups from an albino mom (far cage) to a black-caped mom (near cage) on the day of the pups’ birth. I am distracting the albino mom as Tony picks up a pup. From this experiment, we learned how spectacular rat moms are. They accepted any new pup as their own and nursed and cared for it as they did for their own offspring. Rat siblings were also very accepting of their foster brothers.

This makes a lot of sense. Think of all the technology needed for the genetic analysis needed to determine parentage. Not exactly something that we can do without technology. On the other hand, we and other mammals are perceptual champions. It is to be expected that rats can detect characteristics of other rats that they live with and then recognize others as either possessing or not possessing those characteristics, as family or not-family.

We published this result at the start of 2014 in an article in the online, open access journal eLife.

An experimental test for social rejection in rats

The final design that Haozhe came up with was the following:

What Haozhe found is that rejector rats moved more slowly and approached the restrainer (containing the trapped albino rat) less than did normal (control) rats. That is amazing. It shows that the rejector is subtly indicating his lack of interest in the trapped rat and the trapped rat’s distress. It also got us past GO, so to speak, so that we could then ask our original question, namely did the free rat’s lack of interest have any effect on the trapped rat. Lo and behold, Haozhe found that rats moved more slowly [in an open field test] after being with the rejected rats, behavior indicative of more anxiety.

Viewed through hindsight, this is a simple idea and a simple result. Yet it opens up a wide array of experimental possibilities. Having a rodent model for non-violent, “psychological” social rejection will allow us to test potential interventions for rejection in rats, yielding answers that may ultimately help human society. Take a look at our report on bioRxiv and let us know your thoughts in the comment section there.

I like this story and have chosen to tell it for a few reasons.

First a young scientist was able to develop his own idea and test it. In a world of increasingly expensive and technologically complex science, the ability to ask a simple question for not much more than the cost of rats is sweet.

Second, the idea that rats show an emotional response to being “rejected” is yet another sign of biological continuity. We know we can feel socially rejected and our results suggest that rats can too. Not a huge surprise if we accept the not-radical notion that humans evolved from the same root animals that other modern mammals evolved from. All mammals face social challenges and sociality is important. So, in the end, not too shocking that rats too don’t want to be left out of a game of catch anymore than we do ….

The third reason that I tell this story is to highlight the utility of sharing results and to express my belief in bioRxiv, a “preprint server for biology” run out of Cold Spring Harbor Laboratory [bioRxiv is a descendent of arXiv, the original preprint server that is largely limited to physics, math, computer science and related fields]. Anything placed on bioRxiv is accessible by anyone, anywhere, anytime. It’s free to authors and free to readers. And importantly, work placed on bioRxiv can be read, discussed and used immediately. This means that instead of waiting for months and nowadays years of reviews and revisions, rejections and resubmissions (see cartoon below) – all of which delay the progress of science – scientists can now get their work out relatively quickly. In our case, the experiments were finished last fall. Thus, in less than a year, we were able to complete the analysis, write a manuscript, and are now sharing our findings with other scientists and members of the public. For a provocative piece challenging today’s dominant scientific publishing model, see Steve Shea’s blog post entitled Somebody explain to me again why we have journals. For a report on recent movement toward publishing preprints in biology, see  Amy Harmon’s article in the New York Times.

This brilliant cartoon captures the nonsensical, and prolonged cycle of review-revise-reject-resubmit and repeat that now is more the norm than the exception in the life sciences. Thanks to The Mad Scientist Confectioner’s Club blog for this witty send-up of Your Manuscript on Review.