A picture of a human brain with cuts in the horizontal (ok, the almost horizontal) plane.

In this edition of Lab Videos, we look at horizontal cuts through the human brain. By slicing through the brain, we are able to see all the interesting territory that is normally hidden by the bark or cortex (yes, the word cortex derives from the Latin word for bark; and I am referring to the tree version of bark rather than the dog version) of the brain.

If you want to simply watch the video, here it is:

If you want some background on the structures discussed in the video, continue reading. And of course, feel free to go back and forth.

A primer on directions and planes in humans vs quadrupeds

If you already know the body planes and directions, skip down to The cerebral hemispheres.

When we slice the brain, we can do so in any plane. The three normalized planes of the body are coronal, horizontal (aka axial in clinical imaging terms), and sagittal.

A couple of notes on directional nomenclature may be of interest to aficionados. Consider the four pairs:

These terms have the same meaning in all parts of the nervous system in virtually all animals. But humans, along with a few others such as kangaroos, are different because of that right turn that the nervous system took in support of bipedalism. In quadrupeds, the undersides of the body and face are in parallel planes but in bipeds, the underside of the body is in a vertical plane and the lower jaw in a horizontal plane.

Why do I go on about this? Well, think about the contrast between a rat and a human. In the rat, the coronal plane is transverse (or orthogonal) with respect to the axis of the central nervous system, at all levels. Further, rostral and anterior are synonymous just as caudal and posterior are, and these equivalencies hold true throughout the central nervous system. Now consider a human. For the spinal cord of a human, our underside is in front and our back is “coming after” or in back. Thus, for the human spinal cord, ventral is anterior and dorsal is posterior. This biped-quadruped difference has linguistic implications with clinicians’ employing anterior-posterior terminology within the spinal cord and basic scientists’ employing dorsal-ventral terminology. Thus dorsal or posterior columns and ventral or anterior horns are clinical-basic versions of ta-may-toe vs ta-mah-toe.

A gratuitous exhibition of late season heirloom tomatoes from the author’s garden.

Sagittal slices are really fun to look at, highly informative and also quite challenging particularly for the novice to neuroanatomy. Coronal slices are the most commonly presented view and we’ll look at the brain in coronal slices in a future lab video. I chose to start with horizontal slices because they are both challenging and accessible. I hope that, with some help from me, you can use this tour of horizontal sections to synthesize your 3-dimensional understanding of brain anatomy. So let’s get started.

A top down view of the human brain shows the two cerebral hemispheres which are not joined except at the corpus callosum, which is only present at the ventral margin of the medial hemispheres.

We will examine horizontal slices of the brain starting at the top and working our way down. The first thing that you may notice is that the two cerebral hemispheres come off as two separate pieces; they are not joined. In fact, the cerebral hemispheres only become joined more ventrally, by the corpus callosum. In horizontal sections through the corpus callosum, axons streaming in parallel, left to right and right to left, are evident even to the naked eye. Awesome, don’t you think?

We are visual animals

The cerebral cortex, evident as an outer rind of gray matter, has a modular pattern with different cortical fields primarily concerned with different functions. This modularity is most obvious in the major primary cortices: somatosensory, auditory, visual and motor. Primary sensory cortices are necessary but not sufficient for normal perception. So, visual input to primary visual cortex arrives from the retina, after translation into cortex-ese by the thalamus, and supports visual perception. Many mammals, including humans, are highly visual animals, meaning that vision is the primary sensory modality used to navigate in the world. Corresponding to this, the tract of axons that carry visual information to the primary visual cortex (from the thalamus) is so large that it is easily viewed without magnification. This tract is called the optic radiation.

The destination of the optic radiation is the primary visual cortex, also called V1, which is present along the calcarine fissure (also termed the calcarine sulcus), which adorns the medial surface of the occipital lobe. In the cortex of V1, there is a thin white line called the Stripe (or stria or line) of Gennari. This stripe, visible to the naked eye, was discovered in 1776 by an Italian medical student, Francesco Gennari, after whom it is named in glorious perpetuity. Seeing this stripe using the simplest of tools – my eyes, a knife, and an unstained brain – connects me with the great anatomists of yore and gives me an enormous kick. Take note, all of you students: there are still opportunities for low tech’ discoveries. Be clever and be observant! 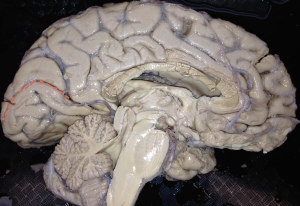 The UChicago C or ram’s horn

When the developing telencephalon (see below) invaginates along the midline to form two hemispheres, the lumen of the developing neural tube splits into two spaces that will become the adult lateral ventricles.

As the cerebral hemispheres expand to accommodate ever so much cortex, the lateral ventricles expand in parallel. The hemisphere expand by arcing around in a ram’s horn shape. And so do the lateral ventricles. In this lab video, we start by cutting a slice off the top of the ram’s horn. So our first glance of the ventricle is one of “looking up at the roof.” Along the edge of the lateral ventricles, choroid plexus is present. Choroid plexus filters blood into cerebrospinal fluid or CSF which fills the ventricles and then leaks out to fill the subarachnoid space surrounding the brain and spinal cord. I thank my pillow of CSF every day for saving me from knocking my brain around as you go about my daily business.

The diencephalon, containing the thalamus and hypothalamus, appears to me cowering within the blustering, ever expansive telencephalon that appears forever seeking new territory. Mammal to mammal, and vertebrate to vertebrate, the diencephalon maintains its modest size. I admire the thalamus for accomplishing its tasks with a parsimonious use of space.

This is a horizontal section through the thalamus (T). In this image, up is anterior. Many other structures are also visible, including the lateral ventricles, choroid plexus, caudate, internal capsule, corpus calossum and more.

Just a shameless excuse to show cute Bam-Bam with his floppy ears.

Recently the claustrum has been in the news. Mohamad Koubeissi and colleagues from George Washington University were studying a patient with epilepsy. This patient had had surgery, years earlier, to take out an epileptic seizure focus (the place where a seizure starts) but, unfortunately, was experiencing seizures again. To locate the focus of the new seizures, the neurosurgeons stimulated in the brain while the patient remained awake.

Neurosurgery is typically done on awake patients so that disruptive regions can be identified. The patients can report sensations or urges to move that are produced by stimulaton. Most importantly, the patients are asked to talk so that regions where stimulation results in disrupted speech can be identified. In this manner, neurosurgeons can avoid removing areas involved in speech.

By chance the neurosurgeons stimulated in the claustrum. They reported that stimulation “resulted in immediate impairment of consciousness, in 10 out of 10 times, with arrest of reading, onset of blank staring, unresponsiveness to auditory or visual commands, and slowing of spontaneous respiratory movements. The patient returned to baseline as soon as the stimulation stopped with no recollection of the events during the stimulation period” (Koubeissi et al 2014: Epilepsy & Behavior 37:32–35). They concluded that “the claustrum – a region in which the effects of electrical stimulations have never been reported to our knowledge in humans – could be a key component of the network supporting ‘conscious awareness’”. This is the only report of this finding and whether the authors’ interpretation that the claustrum is consciousness’ on-off switch becomes accepted, remains to be seen.

I have gone on for way too long and probably no one will actually reach this ending. Apologies for that. I appear to be in a tangential mode of thinking and writing, prone to taking sidetrips at the drop of a neuroanatomical term that catches my fancy. And truth be told, I can’t think of a neuroanatomical term that I don’t have feelings about. In any case, if you want a quick – minute – review of the structures, please watch this short video:

Categories: Brain anatomy, Laboratory videos, The brain in the news