Siblings that walk on all fours use a human gait 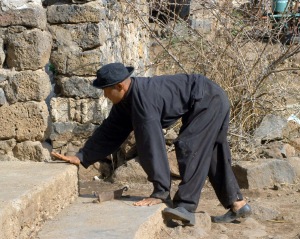 A man from a family with 19 children walking on his hands and feet in Hatay, Turkey, in 2005. (Anatolian/Reuters via the Washington Post)

Last week, a report was published in PlosOne that analyzes the walking gait of siblings from rural Turkey that walk on all fours. [Big thanks to my friend Bing Shaw for alerting me to this via the WaPo.] Walking on all fours is so unusual among human adults that the affected siblings from the Ulas family have received a great deal of attention. Locomoting on all fours is not only exceedingly rare among adults but is unusual at any age. Most babies crawl on their on their hands and knees rather than on their hands and feet.

Before getting to the contribution of the new research, let me share a bit of background on this neurobiological mystery. For those interested, there is a BBC documentary on the “Family that walks on all fours”.

There is also a scholarly monograph on the affected Ulas family members, written by Nicholas Humphrey, John R Skoyles, and Roger Keynes. This monograph is more concerned with the evolutionary implications, or lack thereof, of this unique condition rather than on the neurobiology of the condition, which is our focus here.

The challenge of cerebellar hypoplasia:

Five of 19 children (all now adults) born to parents in rural Turkey walk on their hands. MR imaging of the affected individuals shows a cerebellum that is much reduced in size, termed cerebellar hypoplasia. Particularly small in size is the vermis, the central portion of the cerebellum that is critical to coordinated walking. While the cerebellum and in particular the vermis is needed for coordination of walking, it is not needed for walking per se. Indeed the BBC documentary (at about 25:30 in the show) shows an Italian boy with no cerebellum (complete agenesis of the cerebellum) who walks, albeit in an uncoordinated manner. This fits with our idea that walking is the product of a type of circuit known as a “central pattern generator” or CPG. The output of CPGs produces a patterned stereotyped movement such as walking, swallowing, chewing, and so on. CPGs for different movements are present in the spinal cord and brainstem and are part of the motor hierarchy. The cerebellum modifies future CPG output to accommodate changing external (e.g. walking on sand vs walking on concrete) and internal (e.g. fresh and energized state vs tired and fatigued state) conditions. Without the cerebellum, movement including walking would not adjust to conditions, even routine conditions, and would always appear jerky and uncoordinated. With the cerebellum, walking is modified to match conditions, appearing smooth and coordinated and remaining so within one or two steps of a change in conditions (e.g. step off a boardwalk onto a beach).

Beyond coordinating gait, the vermis is also critical to postural balance. Because we are bipedal, our locomotion involves large doses of both gait and balance. [The challenge of balance for quadrupeds is much less than for bipeds because of the far greater support surface, and in many cases, a lower center of mass.] As with coordinated gait, balance requires the cerebellum. The cerebellum uses information from the inner ear’s vestibulum as well as visual and proprioceptive information to ensure that we don’t fall over as we move about. The cerebellum is constantly checking and adjusting motor output so that we remain upright while standing, locomoting, jumping, reaching, and so on. The beauty of the cerebellum is that it corrects errors before they happen. The congenital cerebellar condition suffered by the Ulas siblings renders maintaining balance while walking, and even while just standing, a very challenging proposition indeed.

What explains walking on all fours in the Ulas family?

The Turkish individual who first publicized the Ulas siblings proposed that this was a case of de-evolution, a glimpse into our evolutionary ancestry. In my opinion, this is not a scientific proposition. A group from the London School of Economics proposed a scientifically reasonable explanation for the walking pattern of the Ulas siblings:

I asked my NeuroMOOC class if the above was a reasonable hypothesis and most felt it was. The most common comment was that students’ families were mesmerized by the story, often watching the BBC documentary together. I think that the most controversial idea was how to view the family and rural environment. Some felt that it was shameful that better medical care was not available or that the parents did not push their children to walk bipedally. I felt that it was quite unfortunate that the people in the town shunned the affected Ulas siblings. This appeared to cause the siblings quite a bit of distress. It was less clear to me how much distress, if any, their quadrupedal gait would have caused them in the absence of the social rejection.

There is the possibility that the affected Ulas siblings may yet learn to walk on two feet, probably with the assistance of a walker. Toward the end of the BBC documentary, we see scenes where the affected siblings get access to parallel bars, walkers and basic physical therapy. Because of the continued flexibility inherent in cerebellar function and because others with similar or even worse cerebellar conditions can walk, there remains the hope that the affected individuals may yet have the opportunity to learn to walk upright.

Now on to the work by Liza Shapiro and colleagues. This study is very simple. It analyzes the Ulas family gait from available movie frames. The analysis is not particularly simple or easy to understand but essentially the time when each limb is in contact with the ground is measured. If two limbs on the same side land and take off at the same time, this is a perfect pace. If the diagonal pairs of limbs land and take off at the same time, this is a perfect trot. Most gaits are neither perfect trots or paces and certainly the Ulas family gait is neither a trot nor a pace. The important finding is that all affected Ulas family members spent at least 75% of their walking in one type of gait (lateral sequence, diagonal couplet or LSDC). In contrast, non-human primates use a different type of gait for walking (diagonal sequence, diagonal couplet or DSDC). This boils down to the forelimb landing after contralateral hindlimb, and before ipsilateral hindlimb (non-human primates) vs the forelimb landing after ipsilateral hindlimb, and before contralateral hindlimb (Ulas family members). To put it in more concrete terms: either the right arm lands after the left leg and before the right leg or after the right leg and before the left leg. In fact the gait of healthy humans asked to walk on all fours is the same as that of affected Ulas family members. The authors conclude that “quadrupedal gait preferences in humans are best understood as a function of biomechanical constraints, rather than genetic mutations.” In sum, the gait of the affected Ulas siblings has nothing to do with evolution. The siblings are simply using the most expedient biomechanical approach to getting around without falling over.

Many of you may have noticed that the Ulas family siblings are often referred to as suffering from so-called Uner Tan Syndrome. I find this term objectionable for several reasons. First, Uner Tan is the individual who publicized the Ulas siblings as evolutionary throwbacks, missing links. As this idea is without any scientific merit and is more than a little mean-spirited, I am loathe to credit the man with his would be eponymous syndrome. More significantly, I am greatly influenced by the view of Sherwin B. Nuland, a physician and National Book Award-winning author, who has written, “There’s a big difference between what we call ‘disease’ and what we call ‘illness.’ A disease is a pathological entity; an illness is the effect of the disease on the patient’s entire way of life.” In Dr Nuland’s framework, the disease that the Ulas siblings have is cerebellar hypoplasia (and possibly additional and associated brain abnormalities). They have reacted to having a much diminished cerebellum by changing their lives, including walking on all fours. The walking on all fours part is theirs, their chosen path, the illness that they have.